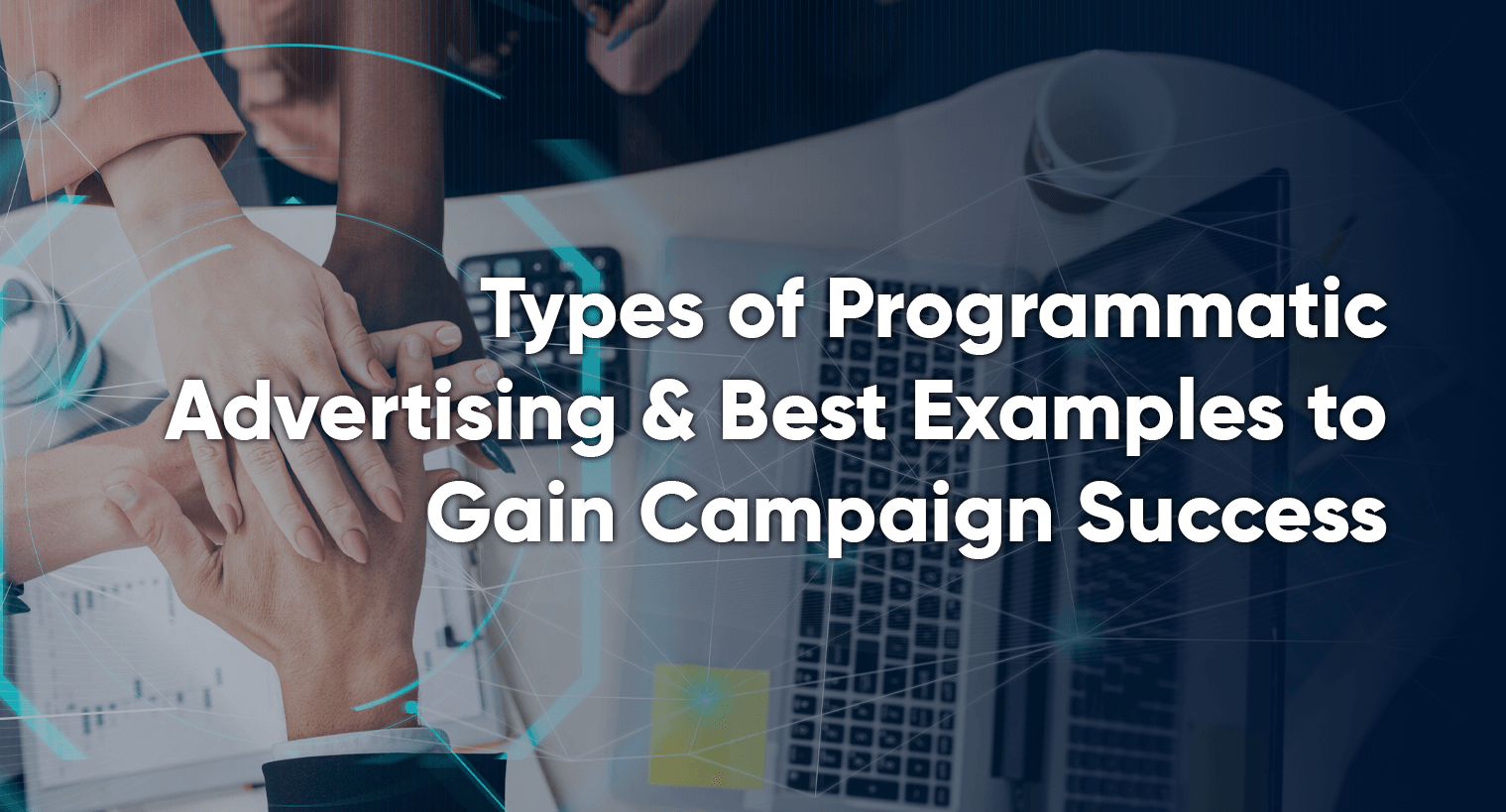 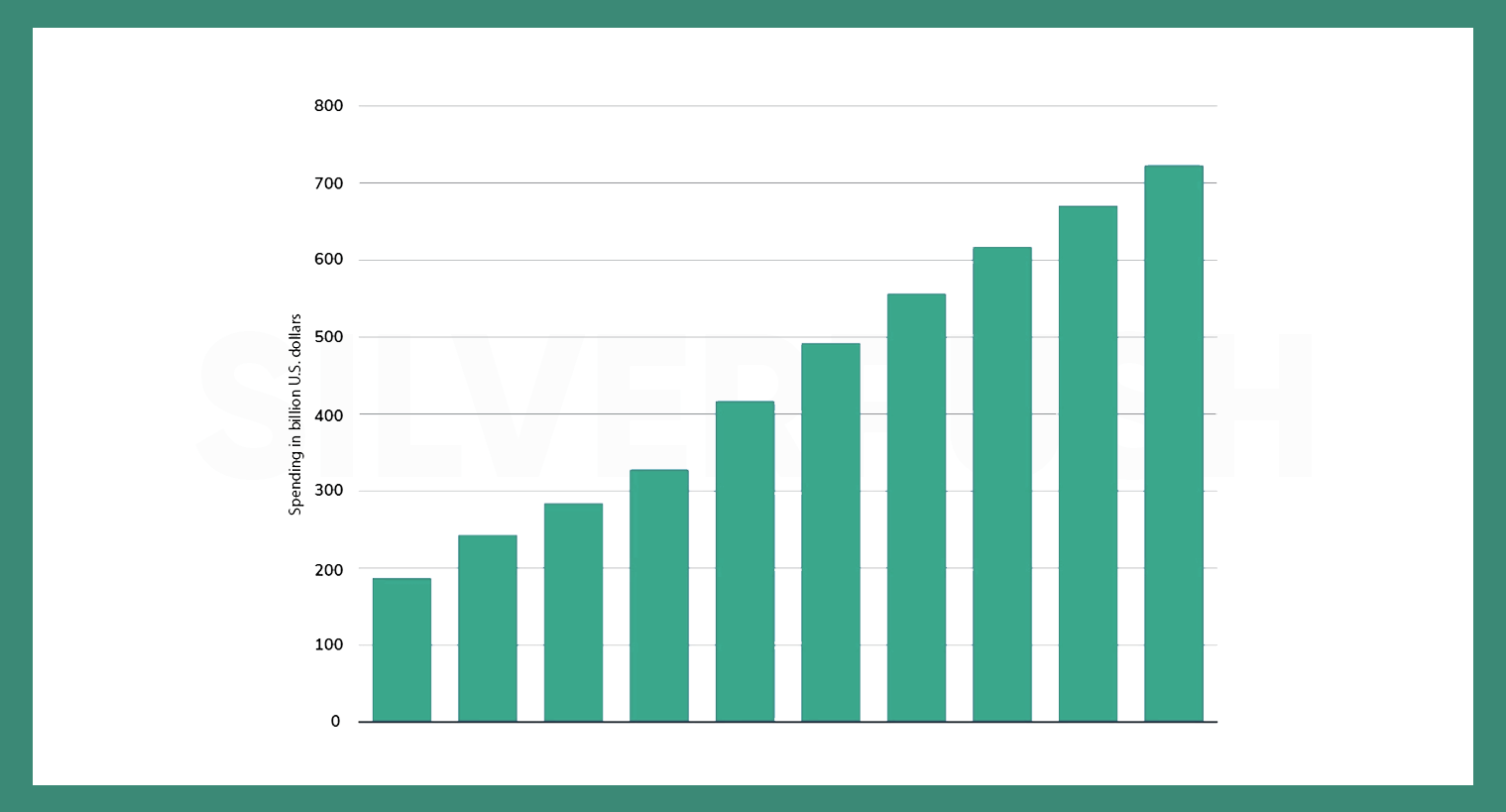 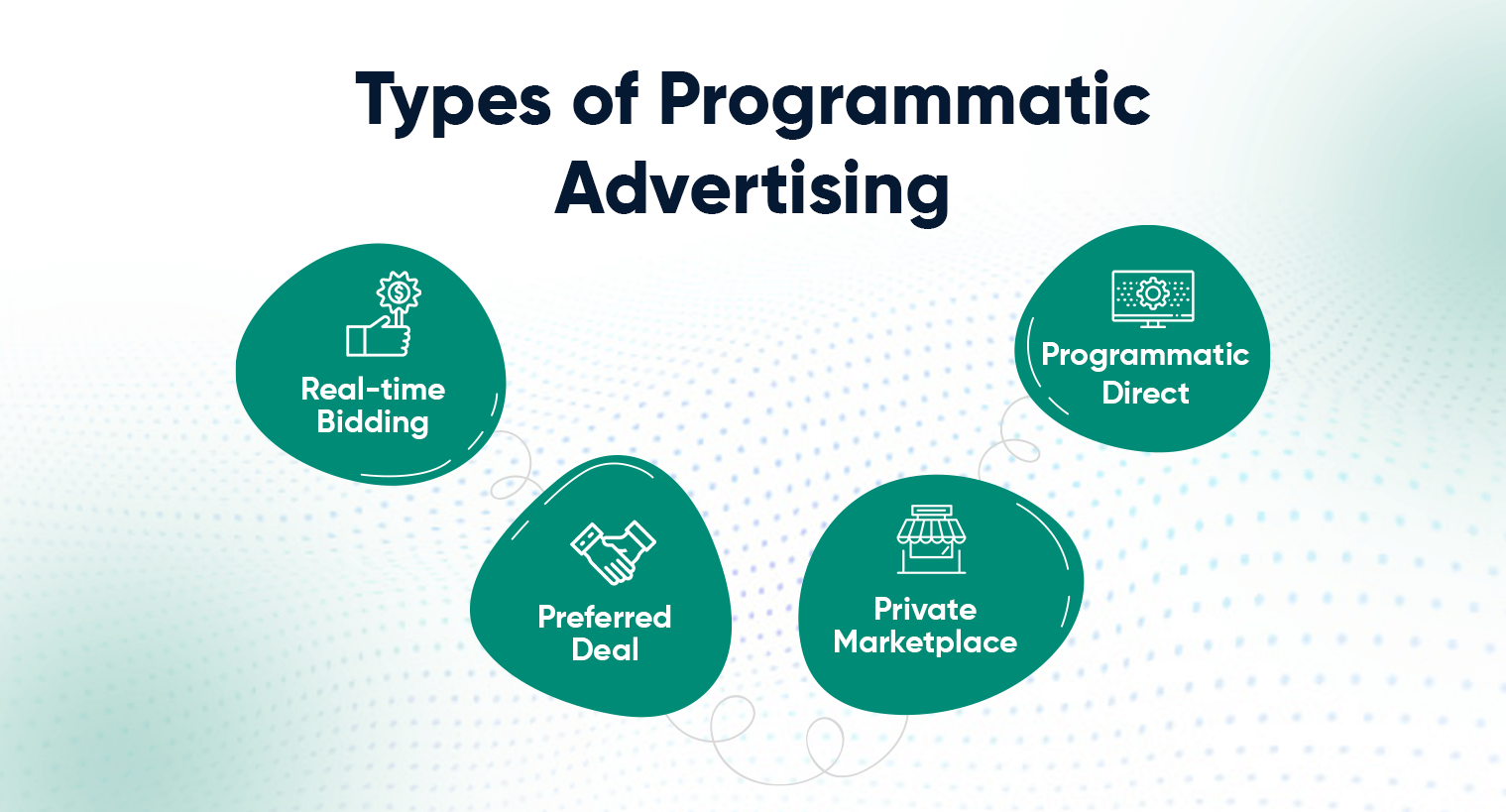 Here are some of the main types programmatic advertising which every marketer should be aware about:

Real-time bidding (RTB) is a subcategory of programmatic media buying. It is practice of buying and selling ads in real time on a per- impression bases in an open auction. Here, advertisers and publishers come together, and the highest bid wins. It is advantageous for both. For advertisers, it helps them to target relevant inventory – thereby increase ROI on their ad spend, where for Publishers – it allows them to collect data on bidders’ purchase patterns and set relevant prices for their premium placement accordingly.

These are some of the reasons why real-time bidding is the most popular type of programmatic advertising. ‍

Preferred Deals programmatic advertising allows publishers to sell a part of their inventory to advertisers at a negotiated fixed price. In other words, preferred deal happens when publishers sell their premium inventory in a one-on-one programmatic auction at a set CPM (cost-per-mille) price to a selected group of advertisers only.

This type of deal is more preferable as it is more transparent between buyers and sellers – publishers are able to view the inventory before the ads run, thus can control the quality of the content while advertisers can overlook and take charge of inventory pricing.  ‍

PMPs is more preferable to those advertisers who want access to premium inventories before they become available to the open marketplace. It offers a much closer relationship with publishers than with RTBs. ‍

It is particularly useful for companies focusing on premium placements and brand safety. This is due to its nature of exclusivity and specificity of programmatic direct media buying. However, it is important to note that advertisers must have a big budget to use this kind of method.

How to Create a Successful Programmatic Ad Campaign?

Each company have their rules, is unique and can’t utilize a “one size fits all” kind of approach. These are some of the key components of successful programmatic ad campaigns you can take a look at:‍

What’s the point of any programmatic ad campaign, or even any ad campaign? The answer is very simple. Think hard….It’s to attract attention. And what better way to do that than with creative ad? Research suggests that only 16% of advertising is both recalled and correctly attributed to the brand, emphasizing that 84% of ad spend could be going to waste… ouch.

In addition, a recent study revealed that internet users are now spending an average of 2 hours and 22 minutes per day on social networking and messaging platforms. Brands have around 5 seconds of that time to grab visitors attention.

A British market research company Millward Brown revealed that ten biggest reasons why ads are widely shared is that they are creative and engaging. Whether be it a catchy slogan, colors that pop or a unique picture that could make a user look at it twice. Unique and creative ads are key to reach the audience, and hopefully, converting them.

It may seem obvious, however, don’t rush through the creative process when you are setting up programmatic campaign. ‍

Fun Fact: optimization starts even before the campaign goes live. Budgeting of a programmatic ad campaign can be approached in one or two ways:

Other factors than can determine campaign pricing are:

A programmatic strategy may vary depending on the goal and key performance indicator (KPI). Thus, before planning a programmatic campaign, it’s critical to set goal(s) and KPI(s). Once at least one goal and KPI is decided upon, you’ll be better positioned to plan the campaign and determine its success once it’s live.

Some KPIs you may want to track include CPC (cost-per-click, or the total cost divided by total clicks), cost per action (CPA), CPA (cost per acquisition), Return on Ad Spend.

Here are some of the successful programmatic ad campaigns:

A leading sports entertainment app, having over 500 thousand downloads. It provides live updates, latest news, scores, etc. The developers goal was to:

With this, the developers were then able to alleviated losses from traditional waterfall model and increase eCPM, add an inflow of higher ad revenues through the new premium demand sources, Efficiently manage user satisfaction levels by delivering a viewable / non-obstructive experience, effectively pull advertisers to place video ads inline with content.

This proved to be a successful programmatic ad campaign and the results are worth looking at.

A mobile app, using technology to match people with tasks, allowing users to watch videos, trying products & services and in turn rewarding the users on successful completion of these micro-tasks and gigs. The developers were looking to monetize the app by integrating ad formats which could improve their fill-rates, standing at 43%.

To optimize user engagement, the developers decided to try the following ad formats:

The campaign was astounding success: 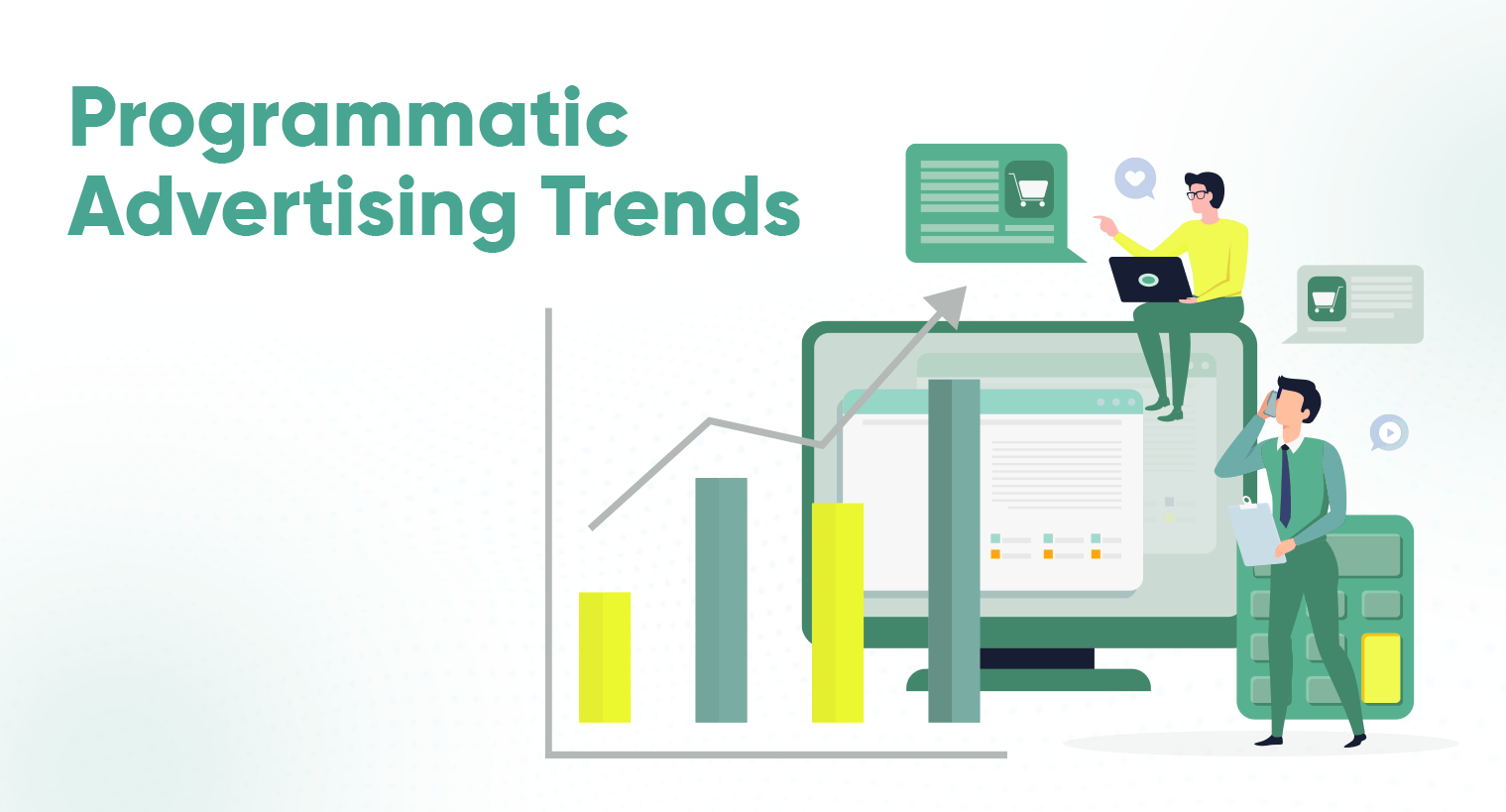 According to the Interactive Advertising Bureau (IAB), more than 69% of marketers have brought their programmatic ad campaigns in-house.

In-house programmatic campaigns are useful are they increase cost-efficiency, resource efficiency, and transparent. A combination of all these lead to higher return on ad spend (ROAS). ‍

As marketers will soon loose the ability to track consumers as third-party cookie data is no longer available by the end of 2023, they need to find new, reliable workaround for programmatic advertising process.

This is where first-party data creates its magic – by offering tremendous value to both advertisers and publishers by providing consumer interests and preferences to help discover the most effective ad messaging. ‍

Advertising on CTVs is a growing trend which cannot be ignored by advertiser. CTV is combining the ease of online advertising and reach of TV. Serving tailored, skippable ads can be served to the target audience while they are streaming video content on their TVs.

Such drastic growth in investment coupled with a rapid increase in streaming service customers makes CTV one of the most valuable programmatic advertising trends.

Advancement in Digital Out of Home (DOOH) Ads

With the pandemic over, consumers are getting back on to their daily routine and more digital screens are popping up all over the country.

There are various benefits for this type of advertising such as broad reach, resistance to ad blockers and unobtrusive placements.‍

A white label software has been built and marketed as a service to businesses.

For many companies around the globe seeking programmatic control over their campaigns, the white label software as a service (SaaS) is an affordable starting point to bring their campaigns in-house. ‍

Programmatic audio uses the technology to automate selling and insertion of ads in audio content such as podcasts, digital radio and music-streaming services.

There are a number of big players who have already implemented programmatic audio. Since audio ads do not rely on visual engagement, thus cannot be skipped or blocked – allowing brands to reach consumers immediately with higher exposure. ‍

Digital and online video still remain to be a popular choice of media type for high-impact display ads. Automated video ad buying has now become the standard for distributing video ad commercials in the US.

According to reports by Statista, mobile gamers will rise sharply from 1.8 billion to more than 2.3 billion by 2026 – giving access to brand for a very lucrative agency to target via programmatic ads.

With games, ads can be integrated directly into the game by allowing users to win prizes by watching ads or by adding ads at the bottom of a screen, very much similar to traditional banner ads. ‍

The demise of cookie has brought forward contextual advertising to the forefront of programmatic advertising.

By leveraging contextual intelligence technology, marketers can ensure that their ads not only appear in relevant content but that it also reaches the relevant audience. This inspire action in consumers and push them to drive better results.

Chocolate by Silverpush is a global company on a mission to deliver best mobile, desktop and connected TV (CTV) video advertising solutions. It offers powerful monetization solutions for app developers, mobile publishers and CTV providers and empower advertisers to deliver exceptional ad experience on all devices. 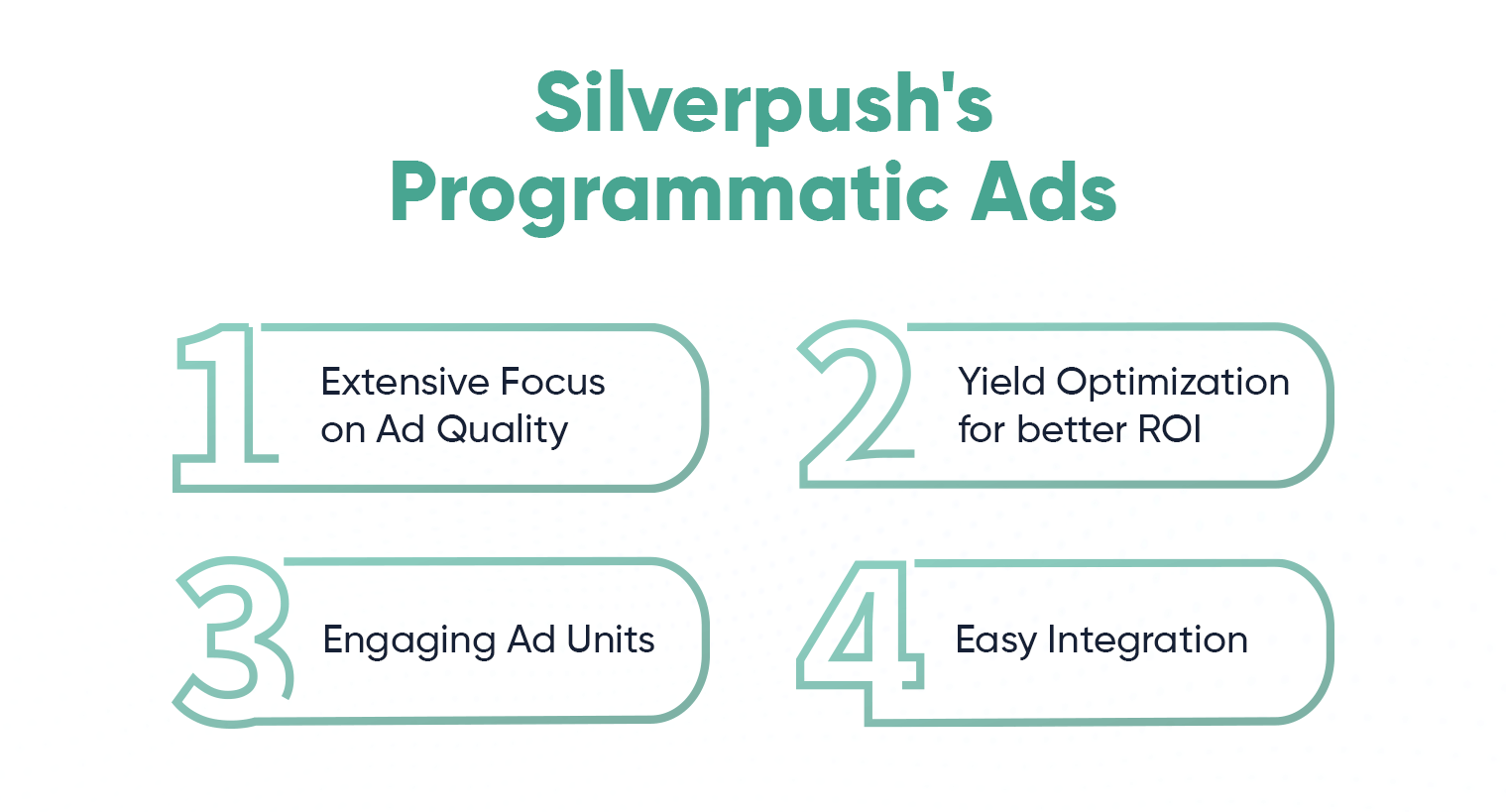 What does Chocolate by Silverpush offer to you?

Brand Safety: A Sure Shot Guide

Study: Brand safety impacts 75% of companies, yet only 26% take action. Don’t be among the 26%! The goal while advertising is clear: The brand must be protected at all costs! But the question is, how? The different targeting methods used by brands of various platforms ...